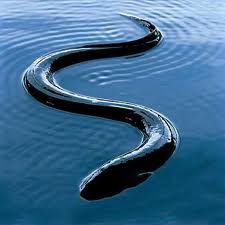 Here is a fable about eels. Imagine that all the eels in the western hemisphere are born in the same place – that still heart of the Atlantic currents known as the Bermuda Triangle, the floating seaweed islands of the dark Saragossa sea.

Nature is full of such curiosities. All north American bats, for example, every year answer the call and congregate in their tens of thousands above Manhattan, dark clouds of bats swooping above the plains, momentarily obscuring the Florida sun, all heading for the same giant caves in Montana, Texas or Ontario, there to cling precariously to the roofs in their millions and produce their young, who in turn cling desperately to their parents, trying to evade the various predators crawling far below them in their own white alkaline excrement. From time to time a baby bat loses its grip on its parent and plummets to the floor of the cave – splat!

Back to the eels – they spawn their young silently in the misty floating islands and then wait, brooding.

The holocaust of the eels is about to begin. It all hinges on which direction they take to launch out on their odyssey: to the left lies life – to the right lies ARBEIT MACHT FREI and ultimate death. Let’s follow the fortunes of the latter – the European eels.

They swim, wriggling and gliding on the friendly currents of the Atlantic gulf-stream until they arrive at the coasts of Europe and penetrate the rivers and lakes, marshes and fenlands of the western sea-board. From the marshes of Friesland to the lagoons of Portugal, they burrow into the mud, transforming from sea-water to fresh-water creatures.

Some of the eels succumb to the toxicity of the waters, others fall foul of fishermen’s nets, yet others form the fish-course in restaurants for aficionados. But most of the eels survive the summer and emerge from their muddy ponds to make their way down-stream and congregate at the mouths of rivers all along the Atlantic coast. They brace themselves for the great swim back to the ancestral breeding grounds in the Saragossa Sea.

None of eels will make it!

The Atlantic currents, so favourable for the outward migration, are too hostile for the return journey. There are few things in nature as poignant as the thought of those eels valiantly swimming homewards and one by one, overcome by exhaustion, dying silently in the cold dark waters of the ungenerous ocean.