(The following two posts are extracted from my memoirs THE WAITING ROOM pub. January 2011). 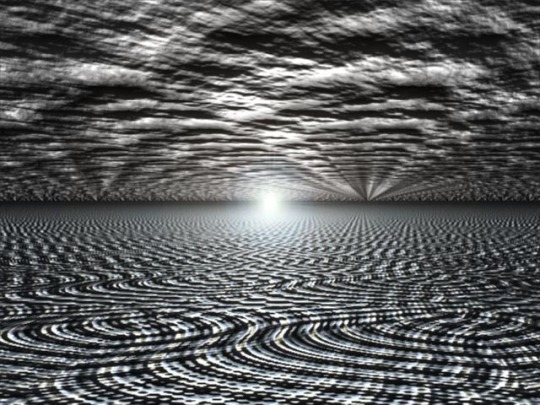 During the course of my second brain procedure I died.

I heard the surgeon calmly call the time of my death and the nurses disconnect me from the various machines and screens which had been monitoring my existence, wash my head and change my bandages, straighten me out and fold my hands decorously over my heart. Then the last of them quietly left the operating theatre and I was left in silence.

The silence deepened as the floor beneath my bed opened and slowly and soundlessly my bed descended on hydraulics, the flaps of the floor, now the ceiling, closing smoothly above my head. I found myself in a sort of crypt and my dream started to turn into a nightmare.

To stay the series of shuddering images and visions and in order to fix them in my mind, I will attempt to describe the vast vault.

It stretched away to a horizon in the same dreary flat monochromatic tan colours of the desert under a dull sky (even the sky was sand-coloured). The bed on which I was lying was in a murky cave giving out onto the landscape and had pieces of furniture carved out of sand around it: a chair, a table and a pré-dieu in front of a tablet or icon. There were figures about the place too – silent sand-effigies, one kneeling at the pré-dieu and the two others standing at the foot of the bed – inanimate, frozen.

Outside the hospital I heard the fire-engines’ sirens giving two mournful wails; of course, I thought, with the logic of dreams – one for a birth and two for a death (one for a girl, two for a boy, three for sorrow and four for joy).

Presently I noticed some stairs cut out of the inevitable sand ascending to a door in the ceiling. Sometimes a doctor would appear in his white coat and begin to descend the stairs slowly and backwards, the image was smooth and coherent at first but began to break up towards the bottom of the stairs, like a person flickering jerkily in a flashing strobe-light … then he was at the top of the stairs again and would repeat the backward descent … an extraordinarily sinister manifestation.

The horror of my situation grew on me.

Presumably the morticians would presently fetch me from this sullen hall.