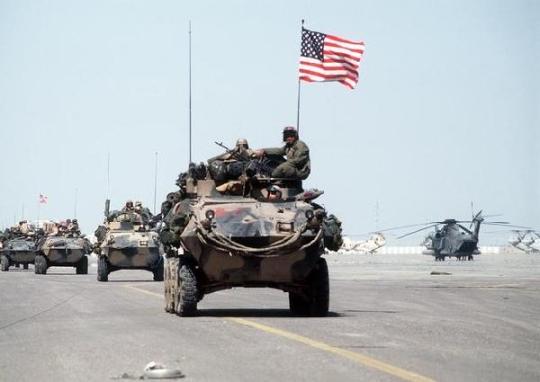 The United States and her allies, the so-called coalition of the willing, enthusiastically started to mass troops, tanks and other military hardware into Saudi Arabia. The American 6th Fleet moved up to the eastern Mediterranean, nuclear submarines prowled at the head of the Persian Gulf and the politicians and journalists ramped up the rhetoric.

I was reminded of Shakespeare’s manipulative Octavian, whipping up the Roman Senate into frenzy and then declaiming: Cry havoc! And let slip the dogs of war.

Later when the 1st Gulf War was unfolding every evening on TV like some grotesque soap opera and the military pundits were enthusiastically explaining about surgical strikes with smart bombs blithely ignoring the fact that the bombs, intelligent or otherwise, were dropping onto children’s hospitals and mosques thus sewing new seeds of ethnic hatred that would  last a generation.

Hello you two, lovely to see you again, come on in, let me take your coats, do sit down and have a drink; for dinner we’re having plovers’ eggs and roast partridge followed by a cheese soufflé; then I thought we could take our coffee into the drawing room and watch The Gulf war, such a bore I know, but Justin’s completely hooked …

As I watched on the television George Bush and his crew of hawkish associates propagating this conflict, I jotted down the title of a poem – In Parenthesis, by David Jones, as a mnemonic … and in the baized chamber the lord Agravaine counsels us, urging with repulsive lips, he nets us into expeditionary war … David Jones had served in the trenches on the western front, as a private soldier in the Royal Welsh Regiment. Steeped in Celtic medieval history, Jones is a difficult but rewarding poet and In Parenthesis is his masterpiece. T.S. Eliot, one of the seminal modernist poets of the century, called it a work of genius. 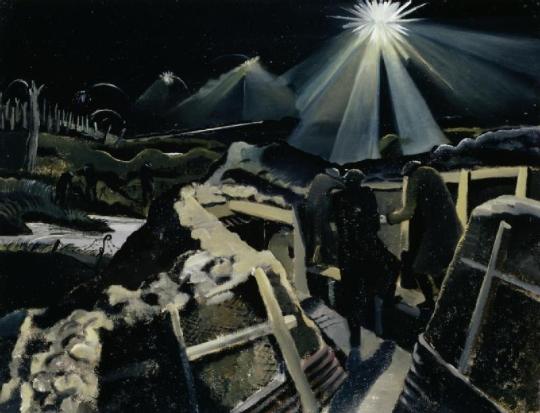 My life is a canvas

My life is a canvas, once painted with broad free strokes of the brush with a bold design of colour and movement, now become crabbed and petty, crouched into one corner, which is then enlarged to fill out the vacuum left by my lost physical freedom.

Now and then the small things creep out from the shadows,

From under the damp stones,

Tiny lizards slithering out silently to bask in the warm sun.

Time, my lord, keeps a wallet at his back,

wherein he puts alms for oblivion.

Another cherished book of mine is Caesar’s Commentaries: 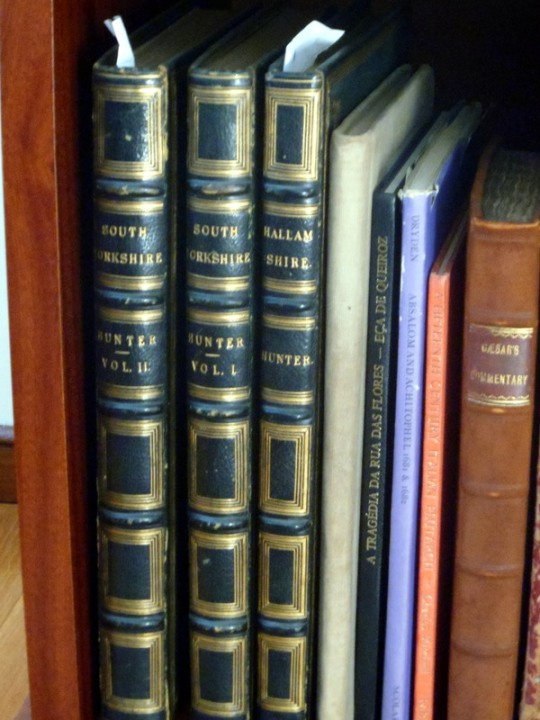 The Commentaries of C. Julius Caesar of his war in Gallia and civil wars betwixt him and Pompey. Translated into English with many excellent and judicious observations thereupon. By Clement Edmunds, Esquire, London, 1677. 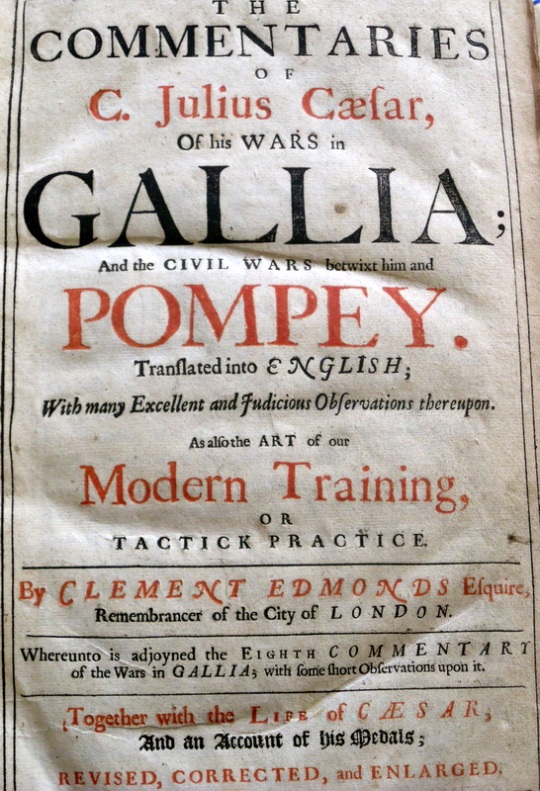 About this book my father wrote thus:

This an old family book though its history is obscure. I think that it was my grandfather who as a schoolboy at Westminster wrote home for a crib to Caesar and was astonished to receive this venerable folio with its quaint double-page engravings of Roman military formations.

It came to my father (Hugh Cantis Milner) who set about restoring it as he did other dilapidated family books. Presumably the original binding was past saving and he had it rebound by a local binder, a modest man who told him that his father had been book binder to Lord Halifax at Hickleton, but that he was not up to that standard. However he has done a fine job in full suede leather. There are no inscriptions except my own dated 1932; the 18th century bookplate has been replaced on the endpaper.

My father then gave it to me. I remember feeling annoyed by the lettering on the spine – Commentary in the singular and I had my doubts about the suitability of the binding. However I hope I had the grace to keep quiet. After more than sixty years the handsome volume seems fresh and good as new.

At first sight the book is highly confusing. In spite of vague words about revision and enlargement, it seems to be substantially a re-issue of the first edition of 1604. A flowery dedication «To The Prince» is followed by two pages of complimentary verses by William Camden (in Latin), Samuel Daniel, Joshua Sylvester and Ben Johnson who contributed two. (Johnson’s own copy of his friend’s book is now in the British Library.) 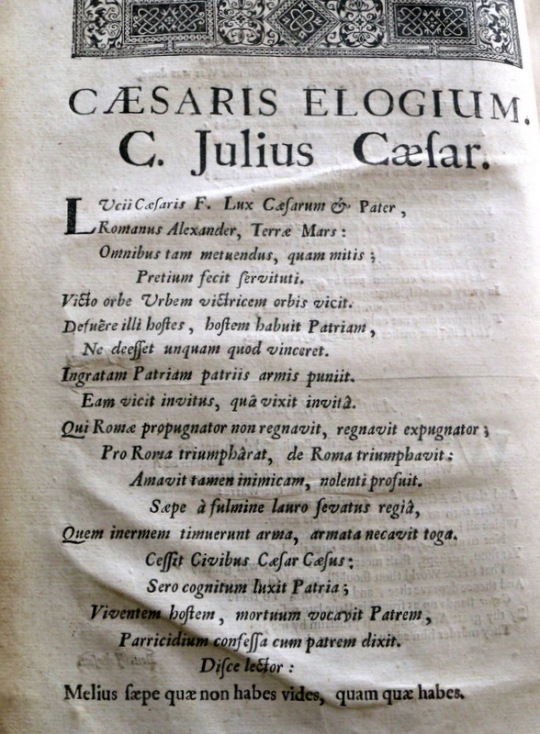 Behind these is an elaborate Latin eulogy of Caesar, which in parts seems only too applicable to Charles I. All these people were long since dead by 1677, and one has to work for oneself that the dedicatee must be the popular prince Henry who died in 1612, making way for his stiff and sickly brother Charles. 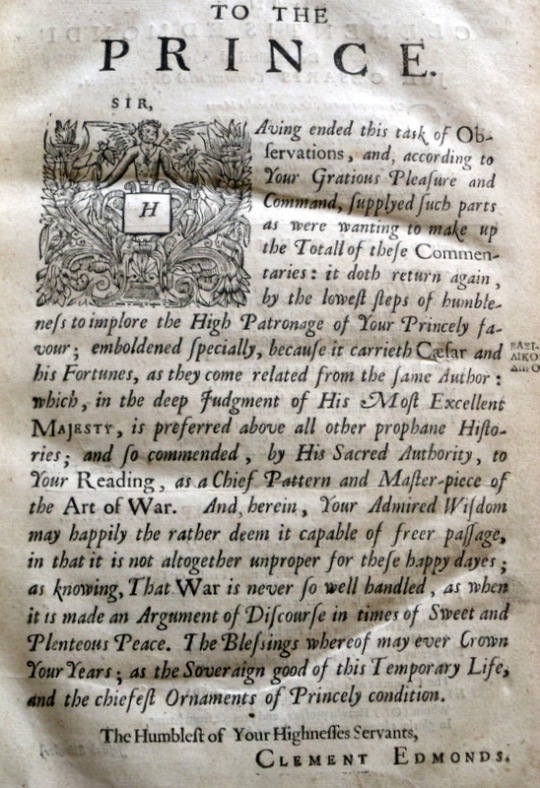 My father left it to me. I was not annoyed.

And the great civil war, 1642-1645, the internecine strife (brother against brother) which split society asunder and toppled the natural order of things, (our revolution in fact), is passed over in silence!

I come to bury Caesar, not to praise him.

The evil that men do lives after them;

The good is oft interred with their bones.